I have an interest in game adaptation, something that we normally think of only as it relates to film-to-game licensing. In our forthcoming book on the Atari VCS, Nick Montfort and I also discuss another kind of videogame adaptation that was once its primary form: from arcade coin-ops to home consoles.

But it’s important to remember that the conversion of sports into games is also a kind of game adaptation. In fact, sports adaptation bears more similarity to arcade adaptation than film adaptation, since both source and target media are media based on systems of rules, rather than one being based on narrative.

Here’s an interesting example. At the Bingham-Waggoner Estate in Independence, Missouri, a board member found a rare copy (one of ten thought to be extant) of a 1893 baseball-to-board game adaptation called Zimmer’s Base Ball Game. Local news reported on the find:

There are a number of notable features of this game. One is its collectability — as the first baseball parlor game, the piece is a sought after collectible among baseball enthusiasts, not to mention the Baseball Hall of Fame, which apparently owns two of the ten copies already. Robert Edwards Auctions recently hosted a copy of the game; the lot sold for $10,440 according to the webpage, although a local Independence paper reported that the total was actually $17,000 (and that another had sold for $27,500 in the 1990s). The Bingham-Waggoner copy appears to be in even better condition, so it could easily command more. It’s an impressive sum for a collectible diversion.

Another notable feature is its design. At a time when American board games were just managing to break out of the spaces-on-a-path into the circular boards that would be popularized by Monopoly (nÃ© The Landlord’s Game), Zimmer’s Base Ball Game features a pitchable wooden ball, mechanical bat, and metal outfielders. If the ball is literally caught by the outfielder devices, an out is recorded. Making the ball pass through the outfielders yeilds the type of hit emblazoned on the board at that part of the field. It is much more like a model of aspects of the experience of playing baseball, physical and aleatory properties preserved, than like a translation of the rules into a different form (cards, for example). In fact, the design of later mechanical handheld games like those by Milton Bradley and Tomy bear considerable similarity to Zimmer’s Base Ball Game. 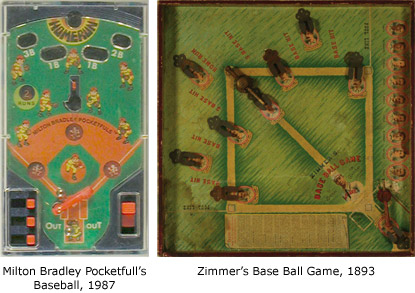 But perhaps the most fascinating aspect of the game is its status as endorsed title. Today we’re used to athletes’ faces and names on our cereal boxes and our videogames: Tony Hawk Pro Skater, Tiger Woods PGA Tour. But I was fascinated to see this trend extend back 120 years. The Zimmer in Zimmer’s Base Ball Game is Chief Zimmer, who played catcher for the Cleveland Spiders and other teams in the late 19th century. Here he is emblazoned prominently above home plate on the game board. 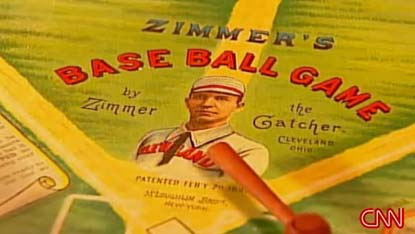 The Wikipedia article on Zimmer claims that he “invented” the board game, but the more trustworthy account in the Robert Edwards Auctions description says that Zimmer “endorsed and designed” the game, something much more like John Madden’s or Dave Mirra’s influence over their licensed games. Apparently Zimmer took on many more marketing endorsements, including Zimmer Cigars. There’s nothing new under the sun, or on the field, it would seem.