An accessible book about the Atari VCS as a platform. Co-authored with Nick Montfort. 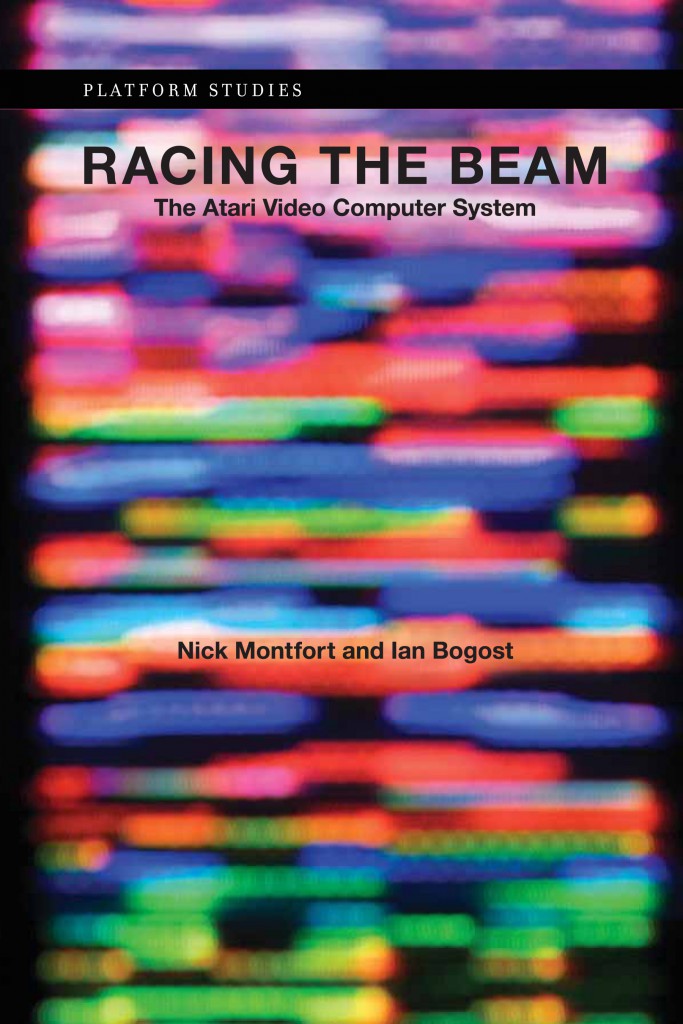 Racing the Beam is a study of the most important early videogame console, the Atari Video Computer System (also known as the Atari VCS or the Atari 2600). Through its main example, the book provides unique insight into the role of underlying hardware and software systems in new media.

The Atari Video Computer System dominated theÂ home videogame market so completely that “Atari” became the generic term for a videogame console.Â The Atari VCSÂ was affordable and offered the flexibility of changeable cartridges. Nearly a thousand of these were created, the most significant of which established new techniques, mechanics, and even entire genres. This book offers a detailed and accessible study of this influential videogame console from both computational and cultural perspectives.

Studies of digital media have rarely investigated platforms–the systems underlying computing. This book (the first in a series of Platform Studies, also series edited by Bogost and Montfort) does so, developing a critical approach that examines the relationship between platforms and creative expression. The book covers the ancestry of the VCS (including Pong and the Atari Home Pong systems), the hardware design of the machine and its implications for creativity, and discusses many influential VCS games (Combat, Adventure, Pitfall, Pac-Man, and others). It is illustrated throught, and written to appeal to technically inclined general readers as well academics studying all sorts of creative work in digital media.

In the book, we describe the technical constraints and affordances of the system and track developments inÂ programming, gameplay, interface, and aesthetics.Â Adventure, for example, was the first game to represent a virtual space larger than the screen by allowing the player to walk off one side into another space; andÂ Star Wars: The Empire Strikes BackÂ was an early instance ofÂ interaction between media properties and video games.

The Atari VCS—often considered merely a retro fetish object—is an essential part of the history of video games.

In Video Computer System, we develop the original approach of platform studies by drawing on textual studies, computer programming and engineering, and computer game studies. We consider the VCS console with its Stella chipset, along with cartridges and controllers, as evidence of human work, decisions, and processes. Our approach traces this material history while exploring the formal workings of the VCS and its early games, revealing the technological and cultural contexts in which the system and its games were developed. This study of the VCS is technically informed, explaining the operation and implications of the MOS Technologies 6507, the Television Interface Adapter, and cartridge ROM.

To encourage more studies that investigate the relationships between the hardware and software design of computing systems and the creative works produced on those systems, we have established the Platform Studies book series at the MIT Press. Authors interested in writing a book in the series should read about it on this website, consult the series website or contact me directly.