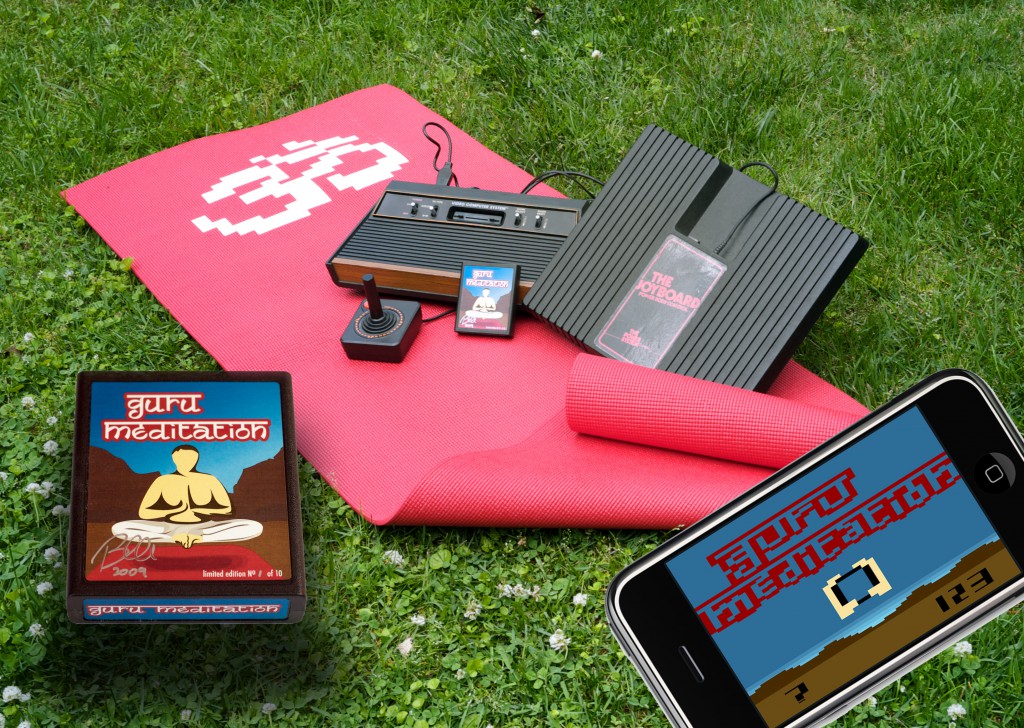 Guru Meditation is my attempt to create a legitimate zen meditation game. It is also partly (perhaps largely) a reimagining of and homage to the Amiga lore, and for that reason I wrote it in 6502 assembly for the Atari VCS, so that it could be played with a joyboard, an unusual “joystick for the feet” manufactured by Amiga in 1982.

The game is designed to be played by sitting cross-legged on the joyboard, although I have also created a mode that can be played with the joystick for those who do not have a joyboard. In joyboard mode, the player must situate themselves perfectly still on the device, legs crossed, on the floor. The yogi will slowly rise if the player is properly situated. If he moves, the yogi drops and the player can resituate and try again without having to restart. Once enough still time has passed, the yogi begins floating and the timer starts. In joystick mode, the end result is the same, but the player indicates his zen by pressing up on the first joystick controller.

Time passes subtly during the game. Clouds move. The time of day changes, roughly every hour, from day to dusk to night to dawn. The player can select a different starting time of day by waiting to choose a starting point on the splash screen. I have tested the game in both modes with several people—one of my students completely zoned out for a solid 20 minutes before I we had to vacate the room we were using, an example of the kind of experience I was looking for.

As far as I know there have been no games released for the joyboard since Mogul Maniac (not counting two unreleased Amiga prototypes from the early 80s), so Guru Meditation also reminds us of the long history of experimentation with physical controllers in the mainstream consumer videogame market, even when both that market and its critics would have us believe that physical interfaces are as new as DDR or Nintendo Wii.

Guru Meditation was originally available as a limited edition, numbered set of ten with Atari cartridge, Joyboard, and accessories. All of the sets have been sold, but one remains hors-commerce for exhibition (contact me for exhibition information).

I’ve also ported the game to iPhone and iPod Touch to make it available to a “broader” audience. The iPhone edition of Guru Meditation is a port, not a reimagining. That is, it retains all the graphics, sounds, and gameplay of the Atari VCS original. Input was updated, however, and the game takes advantage of the iPhone’s similar (but more sophisticated) accelerometer, touch, and sound controls to encourage focus and inactivity. The iPhone edition also includes optional isochronic tones commonly used in “brainwave entrainment,” as well as the ability to disable microphone input in louder public environments. The mobile version also makes the game portable (useful for play at the office, on the couch, or on the go), as well as allowing the title to be experienced by a much larger playership than is possible with the Atari limited edition. Even more than the Atari, the iPhone offers a unique opportunity for a true relaxation game, since it makes such constant demands on our attention—telephone, email, text messages, Twitter, etc. Guru Meditation for iPhone literally makes it impossible to pursue other activities while playing. As such, it offers a convenient secondary commentary on the often overwhelming values of “connection” that today’s portable communication devices embrace. 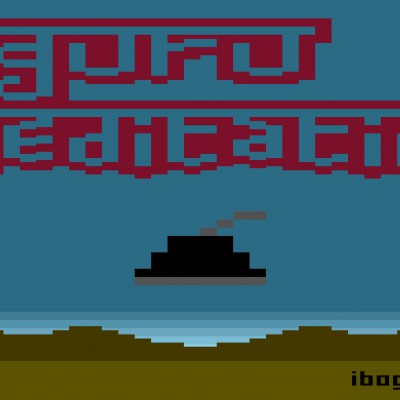 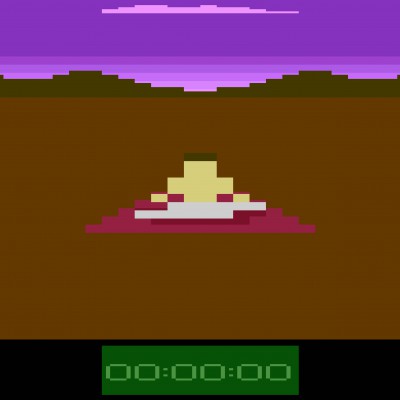 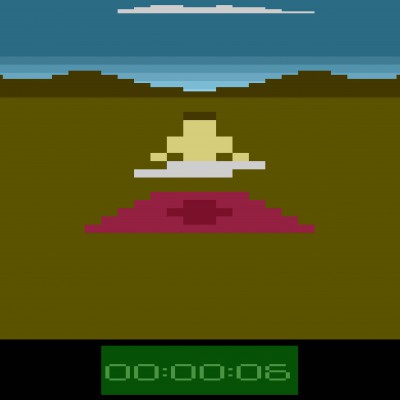 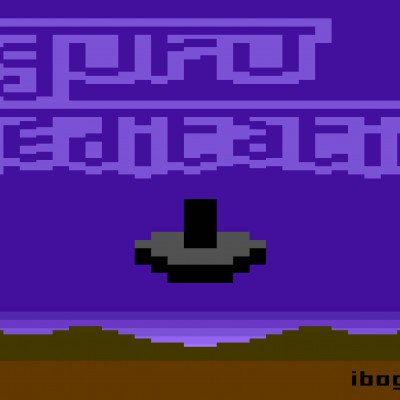 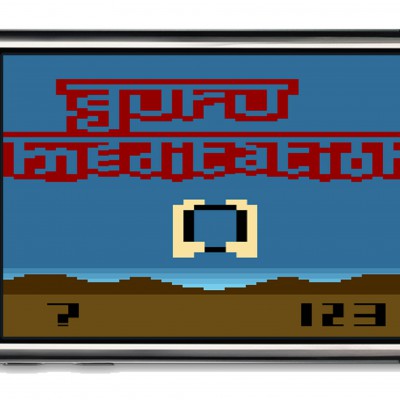 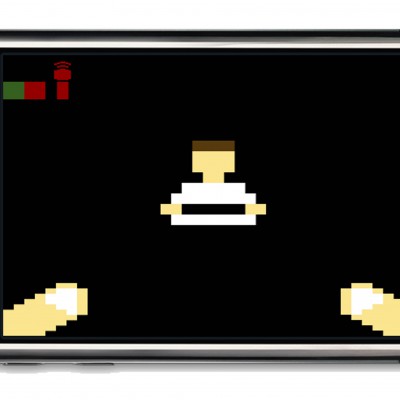 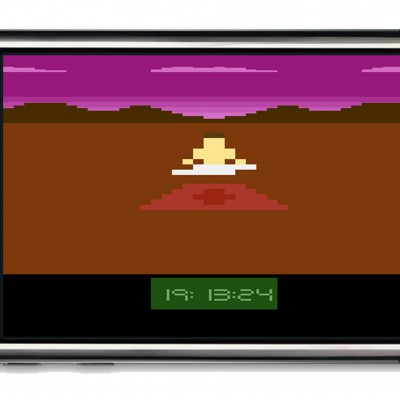 The Amiga computer system was a popular personal computer of the 1980s, originally intended as a videogame machine but later reconceived as a general purpose computer. The development of the Amiga took considerable time, and in the interim the Amiga corporation released a number of joysticks and other peripheral devices for use on common videogame systems, including the Atari VCS (2600). One of these peripherals was the Joyboard, a joystick for the feet. The player would stand on the joyboard and rock side to side or front to back to play a game. The device shipped in 1982 bundled with a skiing game, Mogul Maniac, for the Atari VCS.

In the early days of the development of the Amiga computer operating system, the company’s developers are rumored to have become so frustrated with frequent system crashes that they developed a relaxation technique: sitting perfectly still on a joyboard. According to Amiga lore, this is where the Guru Meditation fatal error messages on the Amiga arose.

I have been fascinated by this idea, and more generally with the often forgotten connections between Silicon Valley and hippie counter-culture. Few remember even Steve Jobs’s 1974 trip to India (just before he returned to California to work at Atari as it happens), just one example of the longtime connection between the valley and spiritualism, as well as the incongruence of new age liberalism and high-tech libertarianism in the valley.

Recent attempts to create games for relaxation and wellness seem largely ill-conceived to me. One example is Journey to Wild Divine, which uses a fingertip controller that measures heart rate and skin galvanic response; the player controls the game by attempting to control this biofeedback. As interesting as this technique may be, the game itself is so visually and aurally sensuous that it often excites rather than calms (thanks to Irene Chien for making this observation in a paper I saw her present at the 2007 HASTAC conference). It seemed to me that a real meditation game would have to reject graphical sensuality in favor of simplicity and austerity. Another example is the student game Cloud, which also claims to offer “a relaxing, non-stressful, meditative experience.” Cloud is a beautiful and unusual game, but I found it to instill exactly the opposite of relaxation. I needed to grip the mouse tightly and I struggled to manipulate the blue-haired character on screen. While the fiction and aesthetic of Cloud may imply relaxation, it’s mechanics don’t cash out that promise.

Likewise, in today’s market of novel interfaces, it’s easy to forget what came before. When Nintendo introduced the Wii Fit in 2008, the press and public regarded its bundled Balance Board peripheral as an entirely novel interface. Yet, in form and function it bears considerable resemblance to the Amiga Joyboard, even if Nintendo’s controller is much more sophisticated. Indeed, among the most popular games for the Wii Balance Board are skiing titles very similar to Amiga’s original Mogul Maniac.

Nintendo even included a simple meditation game as a Wii Fit unlockable. While the game focuses on balance instead of calm, one might observe that it owes much to Amiga lore, just as does my game. (Incidentally, original work on my Guru Meditation was completed before Wii Fit shipped, as I explained when presenting an early version at the 2008 Game Developer’s conference.

For more on my interest in the Atari VCS, check out Racing the Beam, the book Nick Montfort and I wrote on the machine, A Slow Year, my award-winning collection of “game poems” for the platform.