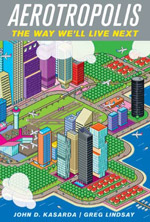 Aerotropolis: The Way We’ll Live Next is a book with a stark premise: historically, cities have developed and thrived around transportation technologies. The present age is that of the airplane, and cities will be built for and around them. What seaports were to the eighteenth century, railroads to the nineteenth, and highways to the twentieth, so airports will be to the twenty-first.

This “aerotropolis” is a new kind of city whose airport is at the center, rather than at the periphery like the automobile-centric cities of the last century. It’s not just an ordinary airport, but a massive hub with numerous parallel runways to maximize aircraft throughput. And it’s not an isolated airport either, but a whole municipality, its airport flanked by a planned city with business parks, logistics and fulfillment centers, industrial parks, hotels, convention centers, and residential districts.

One of the book’s co-authors is John D. Kasarda, a UNC Chapel Hill professor who has spent the last twenty-five years or so developing and advocating for the aerotropolis concept. But “co-author” is a misleading term, since this massive book was written entirely by journalist Greg Lindsay. If a “ghostwriter” is someone who gets paid to write in another’s name, then Kasarda might best be called Aerotropolis‘s zombiewriter. Lindsay had profiled Kasarda for a Fast Company article on the topic, and the two later decided to double-down on the book.

The result is part technological history, part urban detective work, part soothsaying, and part marketing tome. (Kasarda clearly makes piles of cash consulting for governments and organizations worldwide, and the book casts him as divinity more than as mere visionary). It’s historically brief, in the sense that limited ink is spilled explaining how and why transport technology has such a strong influence on urban design. Instead, the book puts Kasarda’s aerotropolis theory at the center, just as the airport sits at the center of the future city.

A number of startlingly underdiscussed ideas radiate outward from this central concept. For starters, our economy is far more rooted in goods than in information and services, despite the almost ubiquitous assumption that the opposite is true. Even health care is a goods economy, focused on devices and pharmaceuticals. For Kasarda and Lindsay, the Internet is not an information system nor a long-tail marketplace, not exclusively anyway. It’s a structure that massively accelerates impulses, popularizing a type of immediacy that used to be the sole purview of big corporations and governments. All those Apple- and Amazon-emblazoned boxes have to be shipped, after all. And when do we want their contents. Now. Thus the aerotropolises of Memphis and Louisville, where FedEx and UPS push the packages that put the lie to the information economy.

The authors call this new situation the Instant Age, and they suggest that the aerotropolis is its primary agent. Ideas and goods need both velocity and density, and an aerotropolis provides the infrastructure to move both. Access and information has made us desire more presence and more goods, not less.

Zombie authorship was a deft move for Kasarda: Lindsay is a terrific writer and an adept journalist who scoured the earth for years researching and writing the book. His prose is adept and engaging, telling story after story about the past, present, and future of global airport cities: the missed opportunities of LAX and and Orange County; the growth crises of O’Hare and Heathrow, and the growth opportunities of Denver and Detroit; Memphis, “America’s Aerotropolis,” which was built around FedEx and freight logistics, and Louisville, an up and coming copycat; the successes of Amsterdam’s Schipol and New Songdo City, a massive urban hub built explicitly around Korea’s Incheon airport; Thailand, poised to turn healthcare into an outsourced service; and of course Dubai, at the center of the New Silk Road.

Some reviewers have rejoined Kasarda and Lindsay for failing to consider the downsides of the aerotropolis. I see it as an opportunity more than an omission: I’m not sure I want Kasarda to be the one recommending dampeners for his own unchecked oneiromancy. One downside that does receive extensive coverage in the book is climate change, a very real problem to which air travel nevertheless contributes a relatively small amount, while simultaneously creating significant opportunity in the developing world. For aerotropolis advocates, we’d be better off ditching coal and cars in order to make more room for airplanes and rail.

But something else bothers me more about the book, and it took me a long time to figure out what it was. I mean that literally.

Aerotrpolis is long. Too long. 200,000 words or so, by my estimation [Update: Lindsay tells me it’s 160k. Hey, I was estimating]. By the time Lindsay was taking me into Schipol’s flower trading markets, I was starting to feel the same exhaustion and hopelessness one gets in the tenth hour of a fifteen-hour flight from Atlanta to the Far East. Even in business class, it’s a strange combination of boredom and panic. The Instant Age, it turns out, is still pretty slow. The world isn’t flat, but round and enormous.

The feeling might have been numbed by a bit more editing. There’s an entire chapter about Kasarda’s personal and intellectual upbringing which is sheer indulgence, worse than sitting next to a talky, burly CEO on a transoceanic flight. And the book in general is just chock-full of detail, some of which could have been spared for brevity.

But griping about editing isn’t the point. There’s a kind of linearity and stagnation to the very form of the book—not this book, but any book—that seems incompatible with the vast implications of the aerotropolis theory. Greg Lindsay is a good journalist, but he’s still doing journalism the customary way—telling stories about people and their plights, whether it’s Cal Fulenweilder’s development plans for Reunion, Colorado or Sheikh Mo’s proposal to out-ornate already ostentatious Dubai. They are good stories, and they are well-told, but they are singular and disconnected.

The Instant Age is a powerful theory precisely because it includes so much, unlike most trendy quips of the form, “The _____ Economy.” It’s an age that radiates knowledge and goods locally and globally overnight. It touches everything we do, from domestic life to food to health to entertainment. It’s an exhaustive theory, but it is not a theory about Cal Fulenweilder or about Sheikh Mo. It’s a theory about the massively amplified systemic behavior of the present and future.

It may seem unfair to criticize a book just for being a book. And as someone who writes books about how system-native media like software and videogames work, I risk becoming a hypocrite in pointing out the flaws of language and writing as a means of explaining complex, interconnected systems.

But look at the cover of Aerotropolis. It’s a gorgeous isometric pixel graphics scene of an aerotropolis, airport at center and commercial, residential, and shipping facilities radiating outward. It’s an aerotropolis as it might be fashioned in a videogame. SimCity is mentioned once in the book, as a metaphor for unfettered development in Dubai during its boom. But SimCity is not just an unchecked toy, a plaything that does exactly what you ask of it. It’s a model (of a model) of urbanism. A particular kind of urbanism, to be sure, and arguably a model of urbanism that doesn’t exactly correspond with twentieth century reality let alone twenty-first. But it’s a model that offers a sense of urban dynamics, a feeling of the way a city works rather than who its players are and what happened to them in 1982 or in 2011.

As I finished reading Aerotropolis, I couldn’t help but feel that I’d rather have played it’s cover instead. I’d rather have had a visceral but systemic sense of how this century’s cities might optimally work according to Kasarda’s vision than a romp through a dozen stories that support it. Perhaps our age isn’t Instant so much as it is Connected. True, connections imply flows, and those flows are getting increasingly rapid. But connections also require entities, both things that regulate flows and the things that flow between them. And those things and connections include not only people and parcels, freight and food, but also the couplings between social conditions and material objectsÂ and financial systems and industrial processes and on and on.

How does the aerotropolis age work? What would living in such a situation entail? What worries would arise, and what might I want to change? What are the economic, political, and social forces that I would have to contend with? What fantasies or expectations about the twentieth century would I have to leave behind?

John Kasarda has made a career out of selling the aerotropolis idea to governmental and industrial leaders. And Greg Lindsay has done a sensational job explaining Kasarda’s vision and its implications to the general public. But neither has tackled the question of what it feels like to live “the way we’ll live next.” And no amount of consulting experience nor journalistic panache can provide sufficient lift for such a vessel. We need new engines and new fuel.

Aerotropolis underscores the fact that the story of the twenty-first century will not be one of stories, at all, but of systems instead. The airport city is just one example, yoked to so many others like airliners to a hub. Living effectively under such conditions requires more than just new logistical and industrial infrastructures—it also demands new conceptual infrastructures, new ways of discussing and debating these new ways of living.