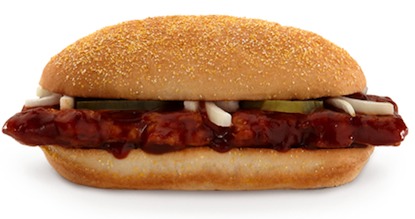 Each year, the McRib returns for a brief visit to Earth. Its arrival elicits reactions ranging from horror to awe. No matter the tenor, each response’s inspiration is the same: this would-be rib sandwich is really a restructured pork patty pressed into the rough shape of a slab of ribs, its slathering of barbecue sauce acting as a camouflage as much as a coating. “Pork” is a generous term, since the McRib is primarily fashioned from otherwise unmarketable pig parts like tripe, heart, and stomach, material that is not only cheap but also easier to mold and bind into a coherent, predetermined shape. McDonald’s accurately lists the patty’s primary ingredient as “boneless pork,” although presumably few of the restaurant’s patrons would line up for a Pressed McTripe.

Despite its abhorrence, the McRib bears remarkable similarity to another, more widely accepted McDonald’s product, the Chicken McNugget. In fact, the McRib was first introduced in 1981, just two years after the popular McNugget was hatched. Chicken McNuggets are fashioned by the same method as is the McRib, namely by grinding undesirable chicken ingredients like skin and dark meat. And both products are bound and preserved by a petrochemical preservative called tertiary butylhydroquinone, or TBHQ. According to the Consumer’s Dictionary of Food Additives, one gram of TBHQ can cause “nausea, vomiting, ringing in the ears, delirium, a sense of suffocation, and collapse.” In a 2003 lawsuit accusing McDonald’s of consumer deception, federal district court judge Robert W. Sweet called Chicken McNuggets a”McFrankenstein creation.”

But despite rejoinders like that of Judge Sweet, the Chicken McNugget flies under the radar, while the McRib sounds a fast food Defcon alarm. In part, this is because the concept of a Chicken McNugget corresponds with a possible natural configuration of ordinary poultry, whose meat could be cut into chunks, battered, and fried. By contrast, there is no world in which pork spare ribs could be eaten straight through, even after having been slow cooked such that some of the cartilage breaks down. That’s one explanation for the horror and the delight wrought by McRib, but perhaps it’s too easy to believe.

Lacanian psychoanalysis gives the name objet petit a to the thing that elicits desire. For Lacan, our behaviors themselves may be knowable, but the causes of those behaviors aren’t always visible. Objet a is not the object of desire, but the thing that causes the desire to come into being. As Slavoj Å½iÅ¾ek frequently observes, the objet a is a stain of the real in the symbolic that motivates particular action. It can’t be seen directly, but must be looked at from a distorted perspective. For Å½iÅ¾ek in particular, this “parallax gap” separates two things that cannot be synthesized.

When McDonald’s first “retired” the McRib in 2005, they promoted the event as the “McRib Farewell Tour.” The promotion included websites with a mock-petitionÂ to save the sandwich, sponsored by the fictitious “Boneless Pig Farmers Association of America.” The same farewell tour appeared again in 2006, and yet again in 2007. Since then, the sandwich has reappeared for a few weeks every autumn.

Together, the eternal return of the McRib along with the blatant celebration of a sandwich that is obviously fake comprise the cause of desire the public bears for McDonald’s. Not just for the McRib, mind you, but for all of the restaurant’s offerings—most of which rely on the same cheap quasi-food ingredients, machined pre-preparation, and chemical additives that the McRib embodies to the point of caricature.

Perversely, the McRib’s retirement is a necessary condition for its viability. If marketplace demand for pork trimmings were to rise consistently, then their prices would rise too, destroying the very conditions that make the sandwich possible. Much like waterways can be overfished, the pork parts market can be over-McRibbed.

The McRib’s stochastic return creates a kind of Å½iÅ¾ekian parallax gap between the eater and the McDonald’s menu. It creates a stain, a tear in the real that reveals the object-cause of desire for McDonald’s, but only briefly before it evaporates like faux-cartilage. The fragile environmental conditions that make the McRib possible also insure that desire for McDonald’s food more generally speaking is maintained.

For Lacan, the lover “gives what he does not possess,” namely the objet petit a that is “in him more than himself.” Likewise, McDonald’s sells what it does not sell, namely the conditions of predictability and inexpensiveness that make its very business possible.

What to make of the fact that McDonald’s knows itselfÂ and its customers well enough to know that it must peel back the curtain occasionally, to show the real cause of desire for its products rather than to coat them in duplicitous marketing about freshness and wholesomeness? It’s necessary to maintain the symptom, to insure that the indirect expression of the desire for its wares take the form of a surprise that clashes with our expectations of what to expect from McDonald’s food. One doesn’t even have to eat a McRib to be subject to it, since mass- and now social media perform the work for us. After all, “Enjoy your Symptom” could easily pass as a McDonald’s slogan.

This strange and upsetting relationship is not so different from the analyst’s talking cure, which helps the analysand see the symptom in order to allow it to be recognized and thereby to disappear. The McRib injects a measure of the real into the symbolic, like sauce on reconstituted pork. Normally, analysis is meant to reveal the desire in order to satisfy it. But in the case of McRib, that satisfaction might be dubious. The purpose of the McRib is to make the McNugget seem normal.