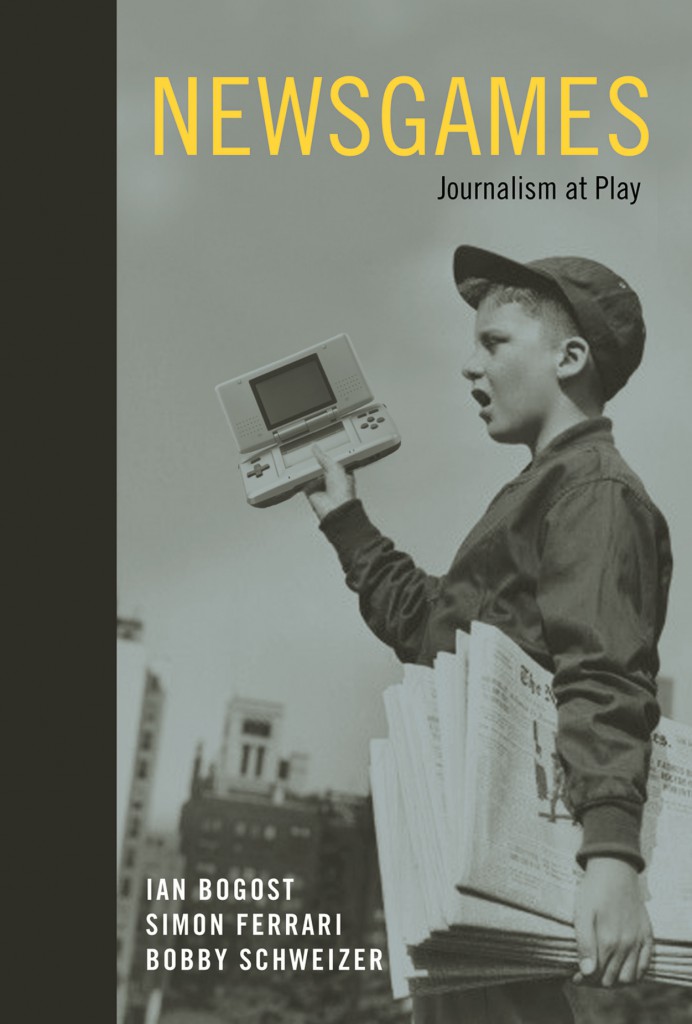 Newsgames offers a broad and comprehensive look at the past, present, and future uses of videogames in journalism. Co-authored with Simon Ferrari and Bobby Schweizer.

Journalism has embraced digital media in its struggle to survive. But most online journalism just translates existing practices to the Web: stories are written and edited as they are for print; video and audio features are produced as they would be for television and radio. The authors of Newsgames propose a new way of doing good journalism: videogames.

Videogames are native to computers rather than a digitized form of prior media. Games simulate how things work by constructing interactive models; journalism as game involves more than just revisiting old forms of news production. The book describes newsgames that can persuade, inform, and titillate; make information interactive; recreate a historical event; put news content into a puzzle; teach journalism; and build a community. Wired magazine’s game Cutthroat Capitalism, for example, explains the economics of Somali piracy by putting the player in command of a pirate ship, offering choices for hostage negotiation strategies. And Powerful Robot’s game September 12th offers a model for a short, quickly produced, and widely distributed editorial newsgame.

Videogames do not offer a panacea for the ills of contemporary news organizations. But if the industry embraces them as a viable method of doing journalism–not just an occasional treat for online readers–newsgames can make a valuable contribution.

Research for this book was made possible by a generous grant from the John S. and James L. Knight Foundation.

“A new generation of news junkies has stopped reading the news and started playing it. Newsgames will be their rulebook.”
—Fred Turner, Stanford University

“Newsgames posits an essential upgrade to the historical relationship between games and newsfar beyond digitization of your morning crossword puzzle. This book is critical reading for those interested in emerging journalistic forms wherein the power of playful systems is harnessed to explicate the events of the day.”
—Tracy Fullerton, Director, Game Innovation Lab, USC School of Cinematic Arts, Interactive Media Division

“[Newsgames] pushes the profession to think differently about how current events can be turned into systems of scenarios and variables, instead of mere stories.”
—Alyssa Abkowitz, Columbia Journalism Review

“In their well-researched and intriguing new book Newsgames: Journalism at Play, Ian Bogost, Simon Ferrari and Bobby Schweizer examine the practice of fusing gaming with journalism. It’s not a new idea. From before personal computers, with games like Diplomacy and Risk to early computer games, such as Balance of Power and Hidden Agenda, front-page reality and game-room fantasy have meshed well. Newsgames suggests this link should get stronger by purposefully employing gaming to convey news of the day. And it sets down a challenge, not to gamers, but to journalists.”
—Michael Humphrey, Forbes.com Technology