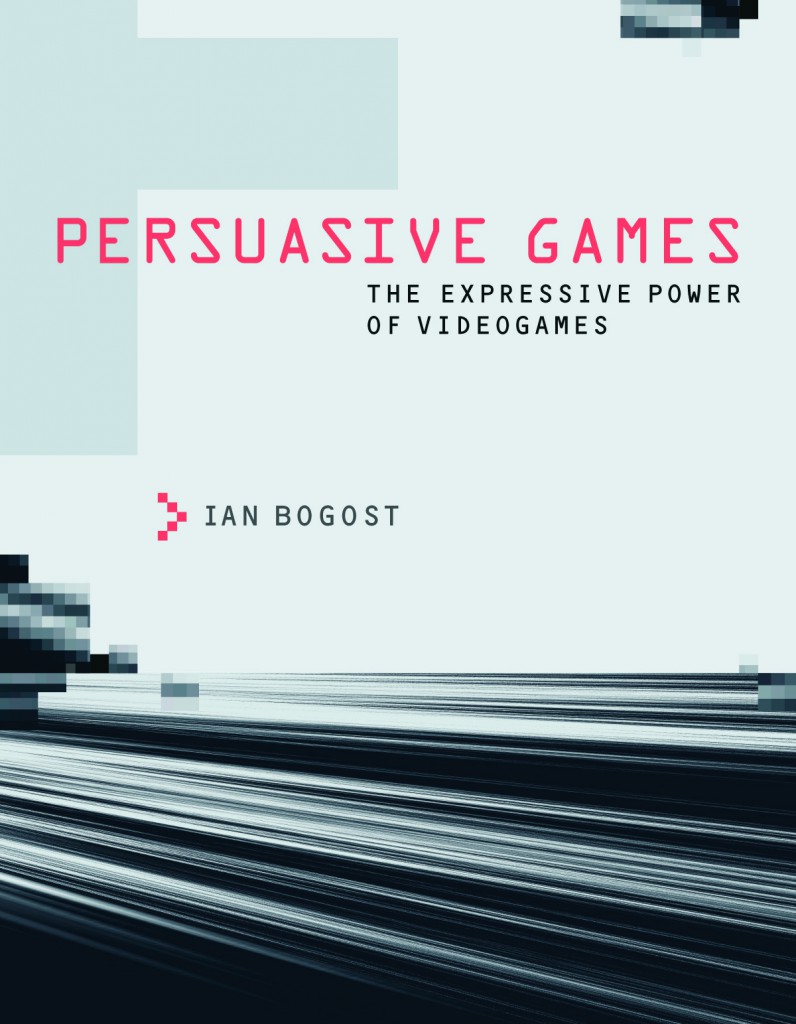 Videogames are both an expressive medium and a persuasive medium; they represent how real and imagined systems work, and they invite players to interact with those systems and form judgments about them. In this innovative analysis, Ian Bogost examines the way videogames mount arguments and influence players. Drawing on the 2,500-year history of rhetoric, the study of persuasive expression, Bogost analyzes rhetoric’s unique function in software in general and videogames in particular. The field of media studies already analyzes visual rhetoric, the art of using imagery and visual representation persuasively. Bogost argues that videogames, thanks to their basic representational mode of procedurality (rule-based representations and interactions), open a new domain for persuasion; they realize a new form of rhetoric.

Bogost calls this new form “procedural rhetoric,” a type of rhetoric tied to the core affordances of computers: running processes and executing rule-based symbolic manipulation. He argues further that videogames have a unique persuasive power that goes beyond other forms of computational persuasion. Not only can videogames support existing social and cultural positions, but they can also disrupt and change those positions, leading to potentially significant long-term social change. Bogost looks at three areas in which videogame persuasion has already taken form and shows considerable potential: politics, advertising, and education. Bogost is both an academic researcher and a videogame designer, and Persuasive Games reflects both theoretical and game-design goals.

“Videogames lack the cultural stature of ‘legitimate’ art forms because they are widely perceived to be trivial and meaningless. But Ian Bogost makes a powerful argument that they are capable of informing and persuading as well as entertaining; in short, that they possess the power of rhetoric. Backed by numerous examples from the fields of politics, advertising, and education, Persuasive Games is an important addition to the debate over what games are, do, and can be.”
—Ernest W. Adams, game design consultant and educator

“Bogost creates and writes about serious games, seemingly simple diversions that deliver educational political and advertising content alongside entertainment. In Persuasive Games, he offers an academic but accessible introduction to their potential, and it is very meaty reading for anybody interested in where the interactive arts meet real-world topics.”
—Scott Colbourne, The Globe and The Mail

“Bogost’s book provides a new lens—procedural rhetoric—to use in the analysis of games and an excellent survey of the history of games of this ilk.”
—Steve Jacobs, American Journal of Play

“Whether we call them ‘serious games’, ‘persuasive games’, or simply ‘video games’, it is clear that there is much of rhetorical significance to mine from the electronic representations and interactions that have captivated such a large portion of the world’s population. Ian Bogost’s book is an excellent step towards understanding and appreciating these materials from an intellectual, critical, and humanistic perspective.”
—Rudy McDaniel, Literary and Linguistic Computing