Horde of Directors was designed and developed specifically for the Videogames with an Agenda exhibition, London UK Fall 2004. I was created by myself and T. Michael Keesey. The game was also exhibited at State of Play: Games with an Agenda, at the Australian Centre for the Moving Image, Melbourne, Australia, March 22 – June 8, 2005. 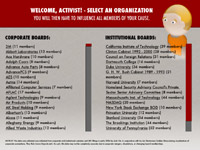 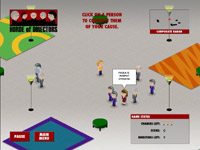 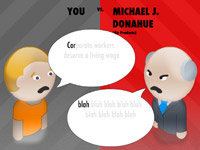 Drawing on data from 2002 Ars Electronica Golden Nica winner They Rule by Josh On, players choose a real corporation or organization to influence, and set to work having heated arguments with those organization’s actual board directors. But quickly, players learn that every board director leads to a whole new network of cohorts, who sit on other influential corporate boards and government organizations. The simple, sometimes repetitive gameplay gives the player a first-hand experience of the Sisyphean struggle to be heard.