Ian Bogost
You can skip reading this and start putting words between buns at buns.life

It occurred to me one summer day: It’s really nice when word are typeset between buns. I remarked upon this fact on social media: 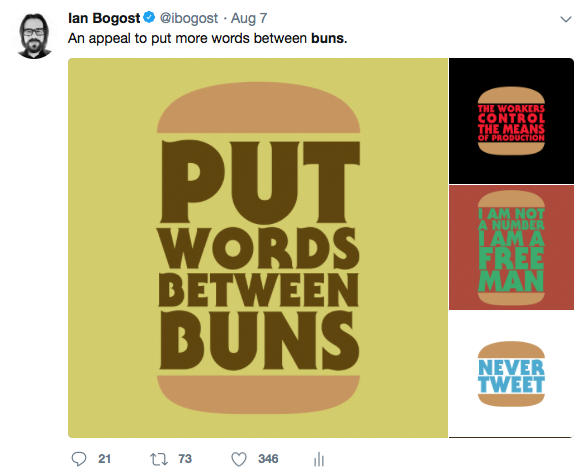 The specimens in that tweet were hand-crafted, of course. It’s easy enough to do in software like Adobe Illustrator, but time consuming too. Maybe that’s one of the reasons why so few sets of words find themselves between buns.

“This is a meme site,” someone pointed out. “Where can I do this?” A few days passed and I built a little website where anyone could author their own words-between-buns creations. You can find it at buns.life. That opened the floodgates. 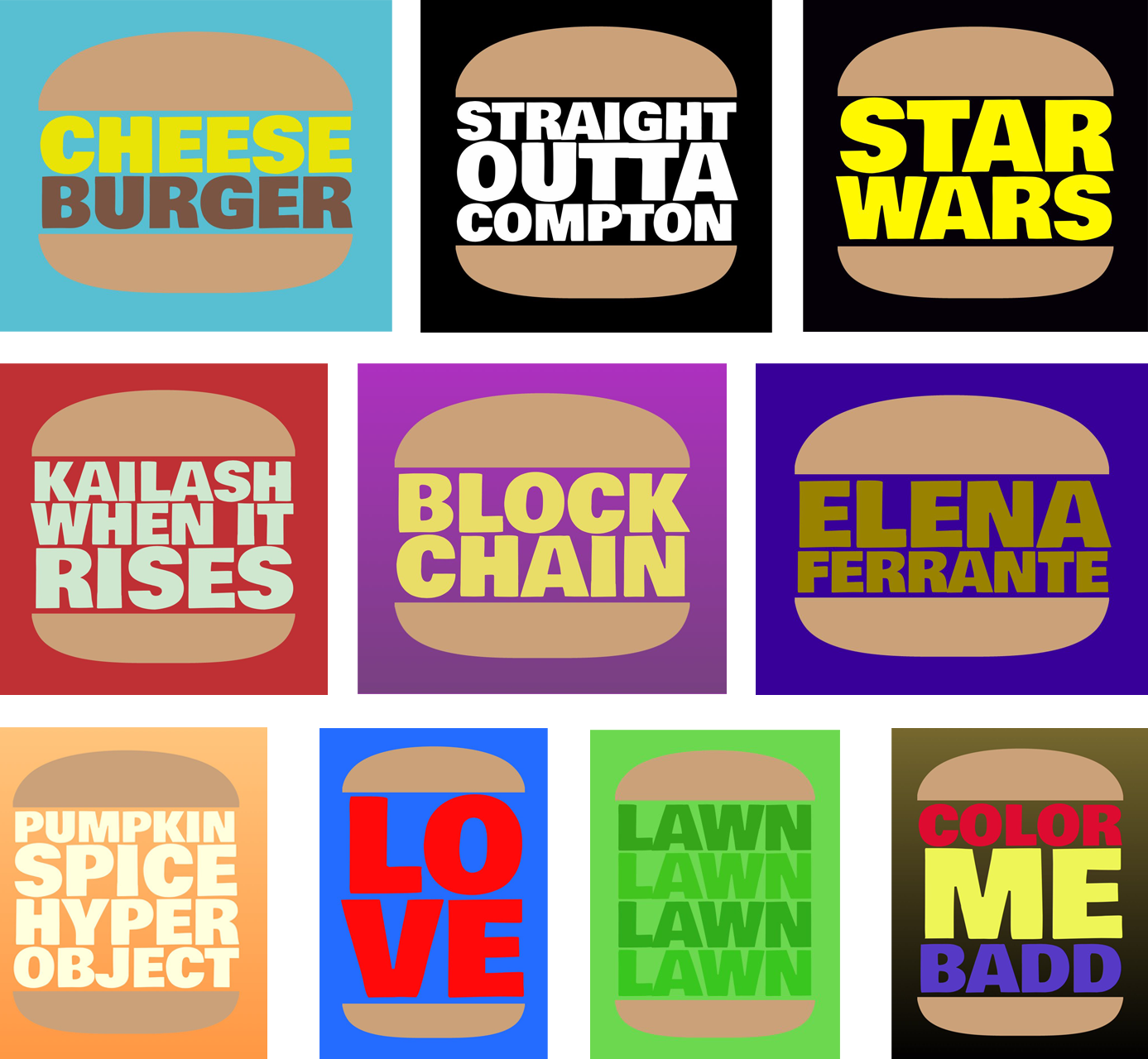 It turned out to be deeply satisfying to put words between buns. Why?

For starters, we’re living in a time of sandwich ontology, and so people are primed to see and enjoy things ensandwiched. Sandwiform. However you’d put it. Is a hot dog a sandwich? Is a Pop Tart? Or is it a ravioli? These questions entertain and befuddle, and mostly they facilitate debate online, which people yearn for even as they kind of hate it. I’ve long been an advocate of the most extreme position in this dark corner of the internet, which I call sandwich monism. Everything’s a sandwich. Or, if you can ask of a thing, “Is it a sandwich?” then it’s a sandwich. The sooner you admit this to yourself, the sooner you will be free. Anyway, sandwiches and their bunned kin are à la mode, at least for now. Since words can denote anything whatsoever, putting them in buns allows you to transform anything into a sandwich. 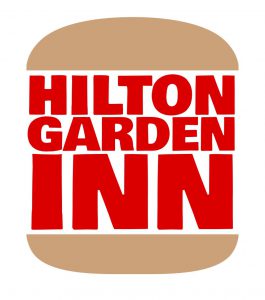 Besides the appeal of sandwiching in these times of its ontological contentiousness, making something a sandwich also implies that it can be consumed into your person. There’s a delight in the promise of physical ingestion, an act that plays both sides: Eating can signify a love for something (devouring as incorporation), or a hatred (mastication as destruction).

Then there’s the connection to graphic design. The visual trope of justified text aligned at various sizes is common to the whole history of poster design, from 19th century notices and bills on through 20th century Futurism, modernism, and beyond. 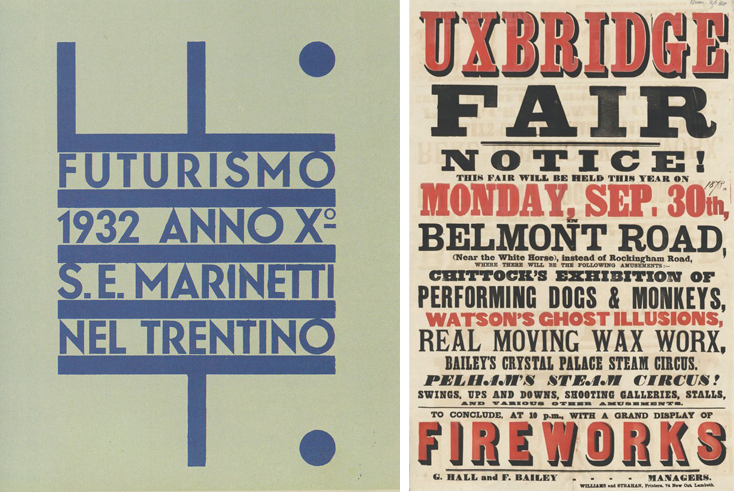 The components of this traditional are also pregnant with meaning. Full-justified typesetting as a symbol of order and machinery and reason, for example, at a time when all those things feel suspect or in doubt—that was true of the modernism as much as it is today. And it also bears a parallel in sandwich fashioning, which has often become a symbol for engineering victories, failures, and conceits. 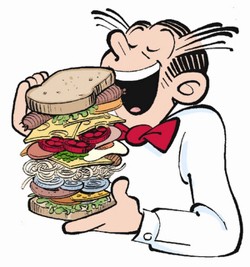 But making a buns.life composition doesn’t just refer to all that history, it also mocks it. The composition immediately caricatures its forebears. These are not serious entries into humankind’s victory over nature, but a send-up of that very idea. The mockery overlaps so much with its own earnestness that it even resists irony. It’s too ridiculous to take seriously, even as a sneer at seriousness itself. But then, bunned words still communicate successfully. Even more successfully than when outside of buns, somehow. 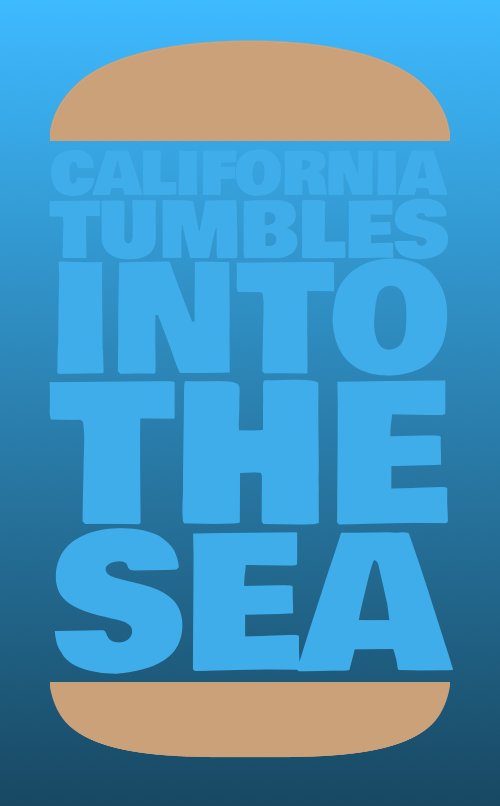 In that respect, my apparent joke about sandwich monsim starts to look much more serious indeed. The secret about philosophy is that it works best when it’s a lampoon or burlesque. Things are most obviously true when you see them in caricature. This is one of the great and under-appreciated discoveries of the philosopher Graham Harman: All interactions between one entity and another are caricatures. Fire burning cotton. Mice gnawing cheese. Computers bunning words. Buns.life provides a machine for making those caricatures, and a tool for exercising the muscle of seeing object interactions as caricatures.

The process by which they get created helps matters. Many years ago, Chaim Gingold was working on the editors in Will Wright’s game Spore. The game was kind of a flop, but the editors were a highlight. They made it easy to create complex creatures, buildings, vehicles, and more without any design expertise. In a talk about the design process for these tools, Gingold mentioned a well-known children’s book called Harold and the Purple Crayon. In the book, Harold can create a whole world out of his imagination, just by wielding his crayon.Gingold generalized that idea as the “magic crayon,” an approach to designing tools that make it easy for people to exercise creativity that otherwise wouldn’t be easy, or even possible for them.

Memes are popular, but as my colleague at The Atlantic, Taylor Lorenz, recently explained, meme-creation tools haven’t really kept pace with memes’ popularity. The absence of magic crayons is essentially the problem. Buns.life is hardly as complex and remarkable as the Spore creature creator, nor is it even remotely as popular as other, more famous memes that you can create yourself. But it is a magic crayon for memes nevertheless. It’s not so hard to make your own bunned words longhand, so to speak, but who would bother doing that, even if they know how to use illustration software? When that burden is lifted, it starts to make sense to compose even one-off posts or replies in buns.life, for a tweet or a text-message conversation, even. 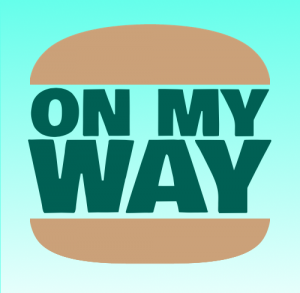 All of this justification for a stupid tool for putting words between buns might seem outlandish—or even offensive. Is this guy for real? But listen, that’s kind of the point. If you take the idea of caricature seriously as a way of getting underneath things, of really understanding them, then humor offers one of the best ways to get to the bottom of something. To find its molten core. Humor is a way of getting at the truth. You already know this. The Simpsons, The Daily Show, Saturday Night Live—these are media that get to the heart of things by saying what can’t be said in supposedly serious realm of news and politics and business.

At bottom, nothing can be serious without a good measure of travesty. If someone tells you they study media or philosophy or culture or society and they can’t take literally anything you put in front of them and at least try to take it seriously enough to get to the bottom of it, then you probably shouldn’t trust them. And if they don’t have a sense of humor about it, that’s also probably a good sign you shouldn’t trust them.

It’s probably no accident, then, that there are Sandwich Muppets. Remember them? They were muppets, but sandwiches. Look at this ghastly thing: 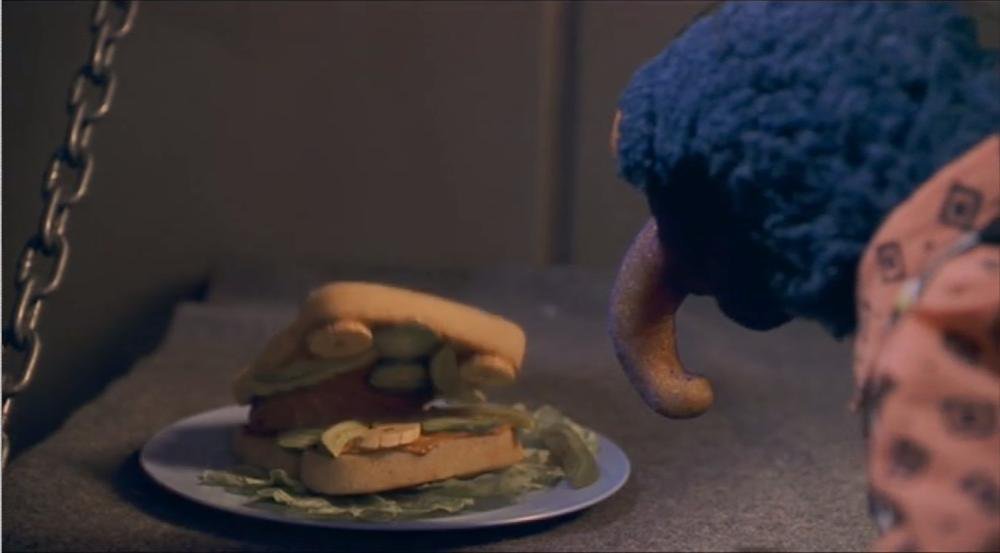 What is even going on? The sandwich is both the muppet’s mouth and the thing that maybe it’s eating, inside the mouth. The bananas (?) are both food to be eaten and teeth. It’s just horrific, but also totally normal. I mean, if you were a sandwich the stuff between the bread would be your mouth, and that would mean that the food you ate would commingle with the food that is your mouth and—gah!

Muppets are maybe the best aspirational form of serious mimicry. The perfect balance. Not full-on lampoons, but also not ironic maybe-I’m-joking-maybe-not winks. What happens if you make things—anything—felted puppets? Let’s find out. (Incidentally, that’s also why people got so upset about that awful reboot of The Muppet Show a few years back. It violated the fundamental muppet promise by trying to take the idea of a felted puppet-marionette too seriously. Muppets shouldn’t be having sex, people.)

Think about it. What do you need to do to turn something into a muppet? You have to find its deep truth, the thing that makes it what it is more than any other, and then abstract the rest, transforming it into a felt mouth and eyes. That’s not just kiddie stuff, friends. That’s first-order ontological work.

I hope buns.life offers something similar, even if on a smaller scale A magic crayon for making, and mocking, the ordered, designed world, that produces artifacts that you can imagine ingesting for pleasure or destruction. Really, what can’t words between buns do?